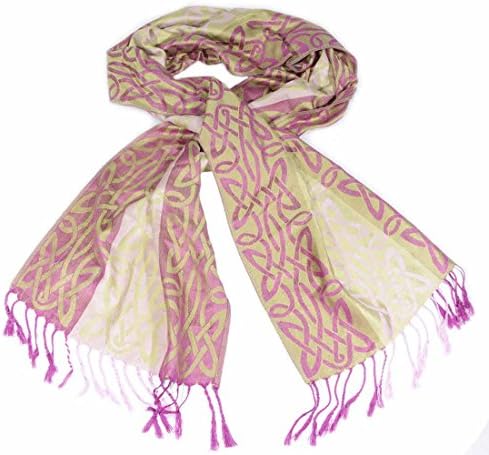 , This Islands of Ireland range has a variety of Celtic designed pashmina scarves, in different styles and colours, inspired in local legends. This pashmina weave is named after the Inishbofin Island, in County Galway. Inish bo finn is gaelic for ‘island of the white cow’. Legend has it that the island was once so shrouded in fog that it wasn’t possible to spot it, until the day two fisherman accidentally drifted ashore. They decided to light up a fire, which later allowed them to see a woman who was trying to drive a white cow into a lake with a stick. Hoping to save the white cow, they approached the woman who turned out to be a witch. She struck the animal with the stick and it turned into stone, along with the fishermen as they were laying their hands on it. Today’s folklore says that every 7 years, a white cow emerges from the lake bringing the islanders a period of prosperity and peace.
Department ‏ : ‎ Womens
Date First Available ‏ : ‎ July 12, 2018
Manufacturer ‏ : ‎ Carrolls Irish Gifts
ASIN ‏ : ‎ B07FDC8YH1